I Married My Cultural Opposite – How to manage when you marry a different family background. It’s not breaking news that my husband and I come from completely different cultural family backgrounds. We’ve been married for over 14 years and we knew going in that we were raised in basically two separate worlds. But, we celebrate it and now see how the “collision” has brought out the best in each of us and balanced our entire family.

First, I’ll start with a little background on each of our families. My parents both grew up in Italy on farms. They were forced to drop out of school at nine years old so they could work on the farm. Food was scarce and they lived through the effects of the Depression and World War II. Once married, they came to the States on a boat, not able to speak a word of English, but with the goal to work hard and make a life for themselves and their family. My parents shared a house with their siblings and spouses and kids (who had also moved to the States by now) and my dad worked multiple odd jobs to save up for the house that he and my mom bought and still live in today. I was born in the States, but was raised by parents that had spent a greater portion of their lives as Italians vs. Americans.

CHILDHOOD TRADITIONS THAT FADED AWAY

My husband’s parents were born and raised here. They are both educated and worked full-time office jobs. Although they divorced when my husband was young, his mom remarried (the step-dad is also educated and works an office job in the automotive industry) and they moved into a new home with the new blended family. Everyone had to adjust to the dynamics of step siblings and step parents all under the same roof. Three of the four children were college aged at the same time. The parents worked hard to offer support, but the kids had to fund their own college room and board. My husband’s parents worked hard and made a decent living, so once all the kids had moved out, they built a new home out in Lenard, Michigan that offered a bit more privacy as they planned ahead for the retirement years. In his words: “traditional Americana with a dose of dysfunction” when referring to the blended family situation.

Growing up in the dominant Italian lifestyle, I was raised and exposed to cultural ways that not many others understood. For example…

On the other hand, my husband’s lifestyle was more “Americanized” and typical…

The two cultures could spell disaster when you look at compatibility and raising children. But, when our cultures collided, we learned so much from each other. We found patience, understanding, and truly got the best of both worlds. I thank my husband for the life lessons his family lifestyle has given me that weren’t a part of me growing up, and vice versa. I’d say our children are true winners as a result. They get to see these two different worlds, and they get to live in the beautiful combination of them as we create our own.

So, I guess you’d say that when worlds (cultures) collide, it’s time to make a whole new universe! 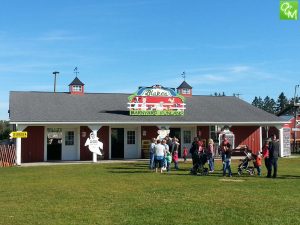