I’ve attended several press conferences for major events in Oakland County through the years and have had the privilege to hear L. Brooks Patterson speak. I’ve also had many opportunities to speak to Brooks personally. Mr. Patterson is always warm, engaging and extremely gregarious – consummate politician.

Patterson has done so much for the county since he took over as Oakland County Executive in 1992. His numerous initiatives have played key roles in helping Oakland County remain among the ten highest income counties in the United States with populations over one million people. In short, it’s hard to imagine Oakland County, or southeast Michigan for that matter, without Brooks.

Not that I expect Brooks to leave us anytime soon, but I do wonder about what happens to the successful initiatives when Patterson does retire? He can’t be the Oakland County Executive forever. So, at the most recent press conference, I sat down and asked him the very question about Life After Brooks Patterson – “What happens when you’re no longer Oakland County Executive?”.

Oakland County Executive L Brooks Patterson – “Yes, when I create these things like Automation Alley or the Brooksie Way, I create a 501c3. It shifts the organization away from the county into a charity setting… And, then I lose control, which is fine. But, they’ll then be taken over by a board of directors and goes on hopefully 30-40 years…I’m always looking ahead for succession when I’m not around. If I just left it in the county, I leave for some reason, or if I died in office, it wouldn’t fall apart. I put it into these boards, and I sit on the boards of course, but I don’t control it. Like Rainbow Connection right here in Rochester – that’s the one I started back in 1985 to grant wishes for terminally ill children …trying to keep these good things and opportunities alive after I’m gone.”

Through Patterson’s success in helping Oakland County retain its AAA bond rating year after year, the wealth created for the county through Automation Alley and the numerous well-run charity initiatives – it’s no wonder that many counties (in Michigan and country-wide) have attempted to emulate many of the policies born in Oakland County. Macomb County, for example, even duplicated the office of County Executive position for Mark Hackel to lead. Hackel and Macomb County have closely mirrored Oakland County with similar ideas and growth initiatives with little doubt that Oakland County was the inspiration for their current mode of government. 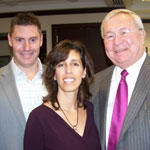 I inquired how Patterson feels knowing neighboring counties like to tap his brain and work closely with him to gather ideas for what they can institute in their own counties. To this, he replied, “Yes. People keep saying that imitation is the highest form of flattery. Sometimes I don’t want to be flattered so much! I do have a lot …now being replicated in other counties and that’s fine. It’s all good for the communities.”