I’ve stated in previous youth sports league reviews that I tend to err on the side of factual rather than heavy opinion. I still give my 2 cents, I just prefer to state my observations and let people make their own choices. I do this because when it comes to youth sports leagues and parents, one parent’s positive is another parent’s negative. 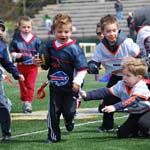 The true lure of the Michigan Youth Flag Football League for kids is the league’s use of NFL teams and mascot names. The kids really get excited to play in an official-looking NFL jersey with team logo. My son loves his jersey and it’s so much more fun for kids to be able to say they’re playing the Jets this week or the Patriots the following week instead of saying that they’re playing the “blue team” or the the “red team.” The reversible uniforms look great and, for a fee, they’ll silk screen your son or daughter’s name on the back NFL-style. Overall, there’s a nice seriousness to Michigan Youth Flag Football that I would suggest occurs when the kids put on their NFL uniforms and look “official.”

My son’s MYFFL team played at Rochester Adams High School which was another big perk for the kids. Getting to play on a field-turf surface “where the big kids play” is a huge plus for kids. For parents, the playing field was a bit of a distraction as parents have to sit in the stands which is quite a distance from the action. I was quite used to having a sideline view of the games in other flag football leagues.

Michigan Youth Flag Football League promises equal playing time on both offense and defense for all kids and I’ll testify that the coaches do a great job of evenly rotating players. The coaches in our league all seemed very well-prepared and commanded sportsmanship.

Michigan Youth Flag Football league breaks their age groups into 3 divisions – 1st grade and younger, 2nd & 3rd graders and 4th grade plus. My son’s team consisted entirely of 4th graders from his school’s class. Often, his team ran into teams that consisted largely of 5th and 6th graders and the competitive balance was missing. The difference between football abilities of 4th graders vs 6th graders was staggering to say the least. I inquired with management about this and they are looking to have the older kids have their own division. Because this is the first year running the league in the Rochester area, there were not enough registrants to make this happen. Next season, if I go with this league, I would inquire about the age ranges in the divisions.

Overall, the Michigan Youth Flag Football league was a step-up in competitiveness compared to our i9 experiences. My experiences in both leagues were very good. If I were looking for a sportsmanship and convenience flag football league, I’d sign up again for i9. If I were looking for competitiveness, I’d look again to Michigan Youth Flag Football.