Sprayza Airbrush Pen Review and Sample Art – Does the Sprayza kids airbrush really work? I bought the pen for my daughter and tested it myself (with pic goodness below).

When you see the Sprayza Airbrush Pen on TV, it’s very misleading. Sprayza is a kids airbrush that works without batteries. You take the airbrush tool, attach a marker to the end, and then blow into it. When you blow into it, the air passes the marker tip which then blows ink onto the paper. It uses stencils so you can make many different drawings. The one I saw on the website comes with these really big stencils and

they show examples of perfectly airbrushed pictures. The Sprayza Airbrush Pen kit that we purchased for $9.89 at Target comes with very small stencils, making it very difficult to make pictures that look like anything.

If you see my Sprayza sample below, this is a picure done by ME, not my five or seven year old. I tried my best by taping down the outside edges of the stencils, and then I used a pencil with a sharp lead to hold down the inside edges of the stencils as I blew. Still, as you can see, the Sprayza airbrush sprayed past the edges and gave it a splattered look. It’s hard to even make out what some of the pictures are. I actually drew in the face, shoes, fire and ribbon, but the rest is airbrushed. You can’t even tell that the figure on the bottom left is a prince frog with a gold crown sitting next to a rock, right? Maybe I did something wrong, but I was very careful. I even waited for the drawing to 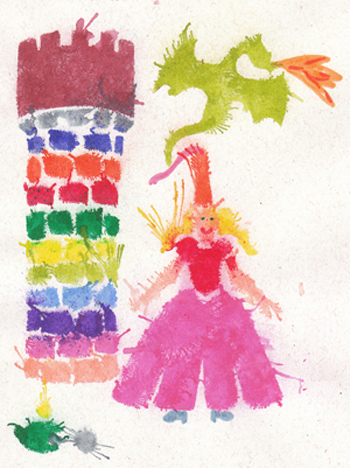 dry before removing the stencil so it was not a matter of smudging wet ink.

Another issue is that Sprayza only comes with one sprayza (and I did not see anywhere in the store where you could purchase additional ones separately). It is meant for individual use since you blow into it with your mouth. I washed our Sprayza out so both kids could use it, but it was a pain because they had to wait and couldn’t take turns easily. Plus, Sprayza accumulates spit in there so you need to clean it out or you will get even more splattering – yuck!

Sprayza Airbrush Pen is such a simple concept, I had hoped my kids could use it independently. Instead, they need me to do it with them so I can help them hold down the stencil as they blow. Hopefully with a little more practice, they can do this on their own, but as my picture will tell you, it probably won’t make much of a difference.

Aside from my Sprayza Airbrush Pen review and opinion, the kids really seem to like Sprayza. I don’t know how long this will last however since they may get tired of making pictures that are really difficult to make out, even after spending a lot of time and effort on them.