I had the opportunity to interview Claire years ago on a media junket for Food Network – I never thought to add salt to the water when soaking mashed potatoes. I picked up some nice tips from this interview I still use today.

Lisa LaGrou of Oakland County Moms – Because of your career and skills, are you always expected to cook and host Thanksgiving?

Food Network Chef Claire Robinson, host of 5 Ingredient Fix – You know, it’s funny because it typically is, and also it isn’t. It’s been about half and half. It depends on if I’m with family and friends, yes, I’m usually expected to at least bring a dish. Or, if it’s at my house, of course I’m cooking the whole thing. Even when I go to somebody else’s house and bring a dish, they kind of leave things for me to do, which I’m fine with. That’s what I do and love and it’s my favorite thing to do. But, I would say half and half because I’m in New York and I’m actually from Tennessee so half of the past Thanksgivings in the past 10 years I’ve spent with co-workers and you might know quite a few of them. So, they also cook and some of them are really great cooks. So, I go their house expecting them to cook.

Lisa LaGrou of Oakland County Moms – Fun! So, when you do cook the turkey, what is your favorite way to prepare it from start to finish?

Food Network Chef Claire Robinson, host of 5 Ingredient Fix – Ooh! Well, start to finish… I like to keep it really simple. I think at Thanksgiving we all try those new dishes and it gets a little crazy and we stress ourselves out, and I don’t think anybody should stress themselves out. It’s just Thanksgiving and we’re all happy to be together, right? So, I keep it simple. Instead of making something new and adventurous and inventive, I like to do a very classic roasted turkey. I don’t really even do the brine. I’ve done the brined turkeys, I’ve done the fried turkeys… I’ve done them all. But really, this year, I’m keeping it very simple. I’m making sure my turkey is nice and washed and super super dry. I also want to make sure the skin is rubbed really really good with salt and pepper. And, then I roast it. I do low and slow and make sure that it reaches temperature. But, low and slow to me helps get the inside cooked and stays nice and juicy. And, then I turn up the temperature and get a nice brown, golden crust on the top so I get that crispy skin. So, if I raise the heat at the end it allows that to happen. If you want to stuff it with lemons you can. I just like to keep it really simple because I really just want the leftovers as I said I love the turkey sandwiches. It’s an addiction…

Lisa LaGrou of Oakland County Moms – How about some tips for mashed potatoes?

Food Network Chef Claire Robinson, host of 5 Ingredient Fix – The most important thing when you’re making mashed potatoes is how you cook them. You want to make sure they’re not overdone and they’re not underdone. Overdone makes soupy mashed potatoes. Underdone makes a little bit of those crunchy ones. You want them at fork tender…. I make sure the fork can easily go into the potato without forcing it too much, but also I don’t want the potato to fully break apart. I actually want to be able to hold it up because that means the potato is cooked but it’s not overcooked. If it immediately breaks apart, fully, completely in little crumbs, it’s overdone. Also, I don’t use a blender ever… a hand mixer… any of that. You can, it’s just that you’re risking them getting really gummy. Overmixed potatoes make really gummy potatoes. I use a potato masher, I use a ricer, I’ve even used a fork in a pinch. That’s about it. Also, make sure your water is really salty. This is the one time you can get salt in the potato instead of sitting on top of the potatoes. Because once they’re already mashed and already cooked you’re not going to get salt in the potato again. It’ll just be on top. So, instead of them tasting nice and balanced, they’ll taste salty. You want to make sure salt the water and that’s your chance to make sure it’s balanced.

Lisa LaGrou of Oakland County Moms – What are your best tips for getting all the Thanksgiving dinner dishes on the table at the same time?

Food Network Chef Claire Robinson, host of 5 Ingredient Fix – That is a tough one. Well I would say the hardest thing to hold… turkey, you can tent it with a little bit of foil and that will help. Warming…Turn off the over but keep the door shut keeping the oven warm. You can keep things warm in there. Most likely you don’t have two stoves tops, two ovens, and two refrigerators. If you’re fortunate to have that, it’s a lot easier to get everything on the table at the same time. But, if you’re not, like most of us… I mean I barely have half of an oven. I’m in New York City. It’s a lot harder to hold things. But, that’s what you have to think about is how can you hold that until something else is ready. When you’re planning your dishes you need to think about what can go in the oven, what can be stove top. You don’t want everything to be in the oven. You won’t have room for it all. You also won’t have room to hold things. So, you need to balance it out with stove top and oven. Specifically for mashed potatoes, I find starches are the hardest thing to hold and keep warm. Good tips are putting hot melted Country Crock on top actually will hold it and keep it warm. But, also I like to cover it in a little bit of wax parchment or put this entire bowl of mashed potatoes on top of a little bit of steaming water and that will help keep it. You’ll want to tent it so you’re keeping it nice and steamed in a way. It’s the hardest thing to do is hold the food hot that should be hot and get it all finished at the exact same time. But, it’s all about planning. And, as I said, if you keep your dishes simple and plan a simple meal…I mean people are expecting to see cranberry sauce, they’re expecting some potatoes, they’re expecting some turkey. You don’t have to go crazy and make things you’ve never tried before. Think about when you’re doing a turkey it’s just a bigger chicken. Don’t let it be too daunting. It’s just poultry.

Lisa LaGrou of Oakland County Moms – What is your favorite Thanksgiving dessert recipe?

Food Network Chef Claire Robinson, host of 5 Ingredient Fix – Ooh…my ginger pumpkin tart. It’s delicious. And it’s so good and so easy. It’s five ingredients. It could not be any easier.

Lisa LaGrou of Oakland County Moms – Where do we find that recipe?

Food Network Chef Claire Robinson, host of 5 Ingredient Fix – You can find that on foodnetwork.com. It might also be on my website but I would check food network. I know it’s there. It’s Ginger Pumpkin Tart and it’s just so simple. Could not be simpler. It’s the same thing as pumpkin tart but even better. It’s jazzed up. I would actually recommend (and this is a secret because we’re only about 5 ingredient cooking)… do a salted honey whipped cream with it. 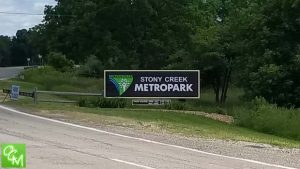